10 Things I Remember about Interviewing…Kareem Abdul-Jabbar

I can’t tell you how many times I’ve been asked to write the inside stories about the famous people I’ve interviewed over the years.

But, for some reason or another, I've never done it.

So, with this post, I officially begin a series called the “10 Things I Remember about Interviewing…," starting with this one about my strange experience hanging out with NBA legend Kareem Abdul-Jabbar: 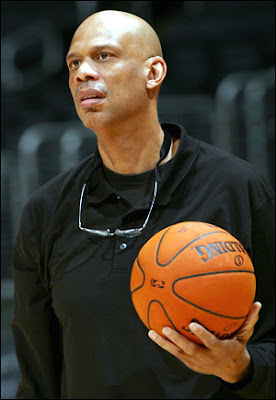 1) That I took a cab from my hotel to Kareem's house and that we needed to drive up and up and up this gigantic hill until we finally got there. It seemed to take forever. He was at the very top of the hill.

2) That his housekeeper made me take off my shoes and put on powder-blue booties before I entered the front door.

3) That he never shook my hand or made any small talk upon meeting me. I must admit that I was stunning to what extent he lacked simple social skills.

4) That, unlike almost any other major athlete I’ve ever interviewed, Kareem didn’t have a single trophy or award plaque or a picture of him with a celebrity or politician in clear sight. He wasn't the least bit interested in building a personal shrine. Instead, quite admirably, there were uniforms of Buffalo Soldiers hanging on racks, original photos of The Tuskegee Airmen, and black-and-white pics of jazz greats such as Coltrane and Miles Davis and Dizzy Gillespie.

5) That I felt so small in his living room, like a Lilliputian in the land of Gulliver. His chairs were so huge I all but disappeared in the cushions when I sat down, his ceilings were very high, and his drinking glasses were so supersized they seemed shot up with steroids.

6) That he was moody beyond belief. At times, utterly fascinating and incredibly pleasant—though never charming. But other times, positively cranky and impossibly difficult, especially late in the day, when his legendary migraines, which he’s suffered with since his teens, apparently kick in.

7) That he didn’t seem to have any discernible sense of humor. All my jokes fell flat dead on him. In fact, after one of my desperate attempts to get a rise out of him, he merely said, glaringly, “Is that supposed to be funny?” He’s a pretty intense guy nearly 24/7. Never saw him laugh. Rarely saw him even grin.

8) That I alternately admired him for his intelligence and strongly-held principles, yet had problems with the way he sometimes treated people, including this one kid who asked for his autograph while we ate lunch one day. “Not now!” he coldly told the kid and said nothing else, shoving his huge hand right in the kid’s face. Felt so badly for the kid. This was the Kareem I didn’t like very much.

9) That, on the other hand, he could be amazingly gentle and compassionate. One day, while we both spoke about our deceased mothers, he actually made me cry when, with the greatest sincerity, he began asking me about what my mother was like and what she went through before she died. I had a Barbara Walters moment, gushing tears. And when I apologized for my breakdown in his presence, he stopped me in mid-sentence, saying so softly, “Don’t worry about it. I understand. It’s something you never get over.” This was the Kareem I liked a lot. The one I like to remember.

10) That our interview, which happened in the mid-1990’s and turned into a 10,000-word piece for the now-defunct Icon magazine, went on for 10 days straight, seven in Beverly Hills, three in Arizona. I don’t know this for a fact, but I’d have to believe it’s the longest interview he ever gave to anyone from print media. And when we said goodbye to one another, I truly thought we had made a connection. Maybe even a friendship. On balance, I liked him, respected him; I thought he felt the same. Afterwards, I sent him a thank-you note for giving me so much of his time and a couple of months later mailed him a holiday card with my warmest wishes. I never heard back from him, in both cases, and, no, we never spoke again.

How do you keep a people down? ‘Never' let them 'know' their history.

The 7th Cavalry got their butts in a sling again after the Little Big Horn Massacre, fourteen years later, the day after the Wounded Knee Massacre. If it wasn't for the 9th Cavalry Buffalo Soldiers, there would of been a second massacre of the 7th Cavalry. Read the book, “Rescue at Pine Ridge”, and visit website/great military history, http://www.rescueatpineridge.com