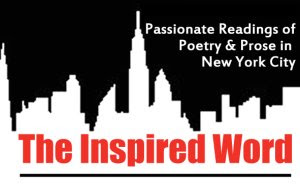 In our strikingly elegant new home, (Le) Poisson Rouge, right in the heart of Greenwich Village, we officially kick off our twice-a-month series with an extraordinary lineup: Shanelle Gabriel, Caits Meissner, Kelly Zen-Yie Tsai, and B. Yung.

Shanelle Gabriel is a gifted poet and singer. She has toured nationally & internationally. Her animate personality and the distinct sincerity of her voice make her a force in the music and poetry world. She is best known for opening & featuring on HBO's Def Poetry Jam as well as in a promo for the 2007 NFL Draft. She was a member of the 2006 Nuyorican Poets Cafe National Slam Team and a competitor in the 2007 Individual World Poetry Slam Competition. She has performed and worked with artists such as Les Nubians, Erick Sermon, Nas, and others. You can also see her acting skills in Q-Tip's video for "ManWomanBoogie." Shanelle's tenacity has allowed her to become a shining star in any path she treads.

Storyteller Caits Meissner uses an exciting blend of poetry, performance and music to deliver visually rich testaments to the complexities of the human spirit. Caits has moved audiences from street corners to Columbia University, The Nuyorican Poets Cafe to Rikers Island. Winner of the OneWorld Poetry Contest, Caits attended the 2008 inaugural Pan-African Literary Forum in Accra, Ghana where she studied under Pulitzer Prize winner Yusef Komunyakaa and other luminaries from the literary African diaspora. In addition to her own self-released work, she has been published in various literary journals and has shared sets with musicians such as Immortal Technique, Grandmaster Caz, Boot Camp Clik and many others.

Kelly Zen-Yie Tsai is a Chicago-born, Brooklyn-based, Chinese Taiwanese American spoken word artist who has performed her poetry at over 375 venues worldwide including three seasons on "Russell Simmons Presents HBO Def Poetry." Winner of a 2007 New York Foundation for the Arts Urban Artist Initiative Award, Kelly was listed as one of Idealist in NYC's Top 40 New Yorkers Who Make Positive Social Change in 2008 and AngryAsianMan.com’s “30 Most Influential Asian Americans Under 30” in 2009. She has shared stages with Mos Def, KRS-One, Sonia Sanchez, Talib Kweli, Erykah Badu, Amiri Baraka, and many more. (www.yellowgurl.com)

Though internationally known as the next face of the hip hop world, B. Yung has recently become a familiar face in the American Spoken word community. In the year 2006, he was offered a slot in "LA's Def Poetry Allstar show" by Stan Lathan, and after excepting, began a very successful career at his new found craft.

In 2008, while still keeping a pulse on the local and international Hip Hop community, B. Yung ranked 2nd in the Nation with Urban Word NYC's slamteam at the Brave New Voices National Competition. He also ranked 1st place in Robert Redford Speak Green Competition that was held at the world reknown Kennedy Center in Washington D.C which earned him a chance to perform at the 2009 Sundance Film Festival.

In 2009, B. Yung got back into the swing of music and joined the Legendary Us3 Band and began traveling Europe on the "Stop, Think, Run" tour. Later his song entitled "Love of my life" (produced by Geoff Wilkinson) premiered on MTV and VH1 Soul and is still running in heavy rotation.

Saul Williams says "[B. Yung] is nothing short of amazing". Natalie Stewart (1/2 of the nationally known R&B Female recording duo Floetry) says "B. Yung delivers passion filled poetry articulating the purpose of prose". Sunni Patterson says "B. Yung is an inspiration to "be."

Please join us for what promises to be an amazing night of passionate words.

MUST BE 21 YEARS OF AGE OR OLDER! MAKE SURE TO BRING ID'S!