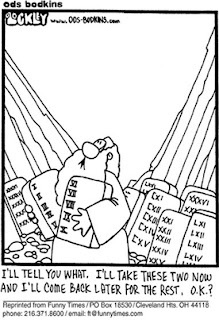 As many of you already know by now, my article, “10 Commandments to Writing Success,” was so popular that various versions have appeared all over the place, including in The Writer and The Writer’s Handbook, as well as on asbolutewrite.com and a slew of other writing resource sites.

Strangely, the whole thing grew entirely out of serendipity. I feverishly wrote the first version in no more than a half-hour and never intended it to be published. It was merely a way to answer all the member questions I had received when I began my first club, Mike’s Writing Workshop on Yahoo, in March of 2001.

As it turned out, people seemed to love it. There was a clamoring for more. So I ended up writing a Part 2 to it…and, well, the rest is history.

I thought it was time to add 10 more to the list for Part 3.

Hope you enjoy—but, more importantly, that you get something out of it and that it pushes you closer to your writing dream.

Here are the new commandments:

1) Pitch stories that you absolutely own. The best way to get an editor’s attention, especially if you’re relatively new to the game or not very high up on the “publishing credits” ladder, is to offer an idea that no one else can do—but YOU! Is it an exclusive interview with someone who’s turning down everybody else? Is it a story that only you know about? Are you the sole expert in this subject? Own a story up and down and you’ll have a huge advantage like you never had before.

2) Always push for more work. Once you’ve made headway with a publication—which means you’ve built up a mutual trust and respect with an editor or editors—keep asking for more assignments or keep pitching ideas. Writing can often be a momentum business. Don’t stop the flow. Also, if you have a published story on the stands, it’s the best time to pitch editors at other places. You’ll seem like the hot commodity of the moment.

3) Rejection should only be the beginning, not the end. Two things to consider here: A. Just because a publication nixes your story idea—or you in particular—doesn’t mean the next place will do the same. If you believe in yourself and your idea, never give up on it. B. Just because a publication rejects you outright doesn’t mean the same place won’t accept you six months later. At most places, there’s high turnover. Editors, as well as mission statements, change quickly.

4) Don’t hang all your hopes on resumes, clip packages, and query letters. Go into any high-level editor’s office and you’ll see stacks of unopened envelopes that nearly reach the ceiling. You’re annoyed, or depressed, that an editor hasn’t gotten back to you? Don’t be. He or she likely hasn’t even seen the contents of your envelope yet—and may never. Make phone calls (without being a stalker). Make meetings (without being demanding). In the writing game, as in most businesses, relationships matter more than anything in an envelope.

5) Learn to negotiate for more money. No matter what a publication offers, it’s often way less than it can afford. Always express mild disappointment at the first number, then pleasantly, professionally, ask for a little more. Understand that I don’t suggest this method for rank beginners. You’ll risk losing the assignment. It’s also running before learning to crawl. But for anyone with decent experience, you’ll gain greater respect by not jumping at the first number thrown at you. Also, if in the end a place refuses to budge on the story fee, ask for something else that doesn’t cost them money, such as your byline bigger or your name—and story teased—on the front cover. Or simply agree to do the story at their price for now (make it seem like you’re doing this out of the goodness of your heart) but, if they love the final product, that the next one will have to pay more. Always have a strategic plan when negotiating a story deal (have an answer ready for anything that might come up) and always get it in writing.

6) Whatever writing you do, try your best to be utterly unique and way above average. You want to put yourself in position where a publication or publisher can’t get what you do from any other writer. This is what gets the big jobs and the big dollars and the big careers.

7) Don’t beg. Always act as if you’re confident in your work and yourself, exuding an attitude that says, “I’d love to do this story for you, I really would, but if you’re not sure that you want it, I’m certain that some other publication will.” In other words, never show weakness, because editors will pick up on that and run away from it.

8) Don’t be a pest or a complainer or unprofessional. Editors will always choose the path of least resistance, wanting to work with writers that carry the least amount of baggage and write the cleanest, most thorough copy. Maybe if you win the Pulitzer, you’ll gain some extra rope. But until then, you best be a writer that editors love to work with.

9) Keep making baby steps upward. Don’t get too comfortable at a certain level. Keep challenging yourself. This will force you to make the work better and better, as well as help you make more and more money.

10) Don’t worry so much about people stealing your ideas. At the major publications, it hardly, if ever, happens. Plus, assuming you’re hitting a smaller, less trustworthy market, you should have so many ideas that if someone steals one that it wouldn’t matter in the least, because you have dozens upon dozens of them. The writing business is an idea business. If you don’t have ideas gushing out of your brain on a daily basis, you might want to try some other work.

Note: I plan to keep adding to this list as long as I live

This is quite an inspiring list! I remember some wise advice a retired school teacher/writer gave me when I first started submitting my work: Michele, accept rejection and move on. If you don't, you won't make it.

I have accepted rejection, gleaned from it, and used it to push me forward to reach all my dreams.

Not everyone realizes that writing is such hard work. We have to be resilient and stubborn--and I am that. :-)

Yes, inspiring is right. If I've learned anything from being an artist, it's that you have to have a thick skin. There's a market for your work. Your job -- find it.