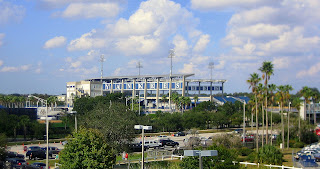 This'll be the first spring training I'll miss in years. That is, unless something breaks with a magazine story at the last second. Been thinking about that. Also thinking about all the great times I had in places like Tampa and Tucson and Ft. Lauderdale and Vero Beach, among so many other places in Florida and Arizona.

Here are 10 of my favorite spring training memories:

1) Interviewing Sandy Koufax twice, once at Dodgertown in the early 80's, then just last year in Port St. Lucie. Still an icon for me. Still awed by him. Still can't believe I stood only inches away from him.

2) Watching Don Mattingly, then a kid in his early 20's, trying to make the Yankees. He reminded my dad, who came over from Boca Raton to see him, of Lou Gehrig. Mattingly didn't make the team that year, but my dad, now long gone, was right.

3) Hanging out for a week with Roger Clemens at his condo against the water in Tampa, eight years before the Mitchell Report. We listened to country music, shared rows of ribs at a down-home barbecue house, and chatted the days away. I liked him then and like him now, steroids controversy notwithstanding. I still defend his presumption of innocence. Oh, by the way, there was this guy who tagged along with us a few times, someone by the name of Brian McNamee.

4) Talking to "Let's Get It On" singer Marvin Gaye, who dropped by the Yankees camp to take some batting practice. What a serene presence he was. Cool, totally cool. Yet, incredibly, so stunningly...he was dead just months later, shot by his dad.

5) Shooting the breeze in West Palm Beach, under the shade of palms and on a wooden bench, with a 6-foot-10 rookie pitcher named Randy Johnson. We talked about whether height made a differecne for pitchers. He thought it did. I agreed. It was a nice chat. He seemed like an okay guy. Who know that he'd end up being one of the most anti-social baseball players ever to play the game, swatting away the media as if they were gnats.

6) Cringing when I introduced my dad, a lifelong Yankee fanatic, to then-Yankees manager Clyde King, and my dad proceeding to tell King what he needed to do with the lineup and rotation to make it right. LOL

7) Interviewing David Wright and freaking out when I realized that my recorder wasn't on. He didn't miss a beat. "I'll just do the interview all over again," Wright said. What a great kid. Nobody else would ever do that.

8) Asking Alex Rodriguez what he did all winter and him telling me he read self-help and motivational books. Guess he could really use them now.

9) Playing pool with Dave LaPoint, a journeyman pitcher for the Yankees in the 80's who told everyone he was a bit of hustler. I couldn't help but challenge him to an eight-ball duel. So, after a workout one day, he and I headed over to a huge sports bar in Ft. Lauderdale where they had full-size tables. We played around 10 games together. He lost every single one. So much for the self-proclaimed rep. I remember his face turning a shade of red I'd never seen before.

10) Noticing a tiny, rail-thin, earnest-looking kid with big, unblinking eyes running around doing errands for Boss Steinbrenner, who in his heyday certainly knew how to keep people running around. The kid eventually grew in the organization until he became the GM. The kid is Brian Cashman.