"Meet the Press" Moderator Gets All Up in Social Networking 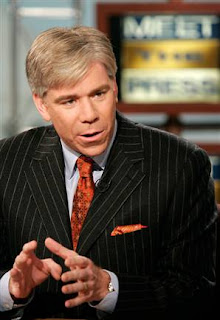 Meet the Press Moderator Gets All Up in Social Networking
Source: mediabistro.com's Daily WebNewser

Last week, he went micro-blog by launching a Twitter account. This week NBC's David Gregory went one further by launching a TypePad blog called, "The View From Here" (davidgregorytv.com). It includes posts on what's coming up on Meet the Press, his Twitter feed, a section on what Gregory is reading, and a list of his favorite sites (ahem, neither WebNewser nor TVNewser are on the list!)

What's interesting about the blog is that it's not associated with msnbc.com, which is the starting point for many of the dispatches from NBC Newsers including Brian Williams' blog.

In addition to Twittering and blogging Gregory is also becoming staff photographer. After his Today show live shot this morning, he snapped this picture and others in a nearby studio where MSNBC's Morning Joe was taping. He then uploaded it via Ping.fm to his Facebook Fan page.