Writing Quotes of the Day 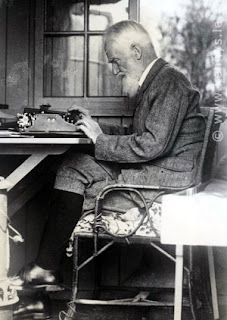 “Literature is like any other trade; you will never sell anything unless you go to the right shop.”—George Bernard Shaw

“The principal mark of genius is not perfection but originality, the opening of new frontiers.”—Arthur Koestler

“The real writer is one who really writes. Talent is an invention like phlogiston after the fact of fire. Work is its own cure. You have to like it better than being loved.”—Marge Piercy

“Poets need not go to Niagara to write about the force of falling water.”—Robert Frost

“The sound of a word is at least as important as the meaning.”
—Jack Prelutsky

“Writing, I think, is not apart from living. Writing is a kind of double living. The writer experiences everything twice. Once in reality and once in that mirror which waits always before or behind.”—Catherine Drinker Bowen

“Talent alone cannot make a writer. There must be a man behind the book; a personality which, by birth and quality, is pledged to the doctrines there set forth, and which exists to see and state things so, and not otherwise.”—Ralph Waldo Emerson

"I always stopped when I knew what was going to happen next. That way I could be sure of going on the next day."—Ernest Hemingway

"The Word will always come first, and if it is a poetic word, so much the better.”—Efrain Huerta

What a great set of inspiring quotes!