Just When You’re About to Give Up…Think Of Elvis 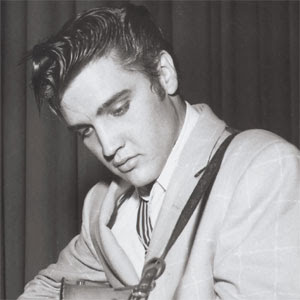 There are days when my writing is flowing. Days when I feel good about what I’m working on and when I find out about different places to submit.

Then there are those days when I feel like I’m hitting a brick wall.

I research different magazine markets only to find out that they’ve closed due to the economy or I check my e-mail and find a rejection. I tend to send out submissions in bulk, which means I often receive rejections in bulk. Nothing does more for the ego than getting a stack of letters (or e-mails) to find that, “We loved the voice and the humor. However we’ve decided to pass on this project.”

Last week, it felt like I couldn’t get anything off the ground. I received my fastest rejection ever (it was in my inbox in less than twenty minutes) and I couldn’t find any paying markets that were accepting submissions.

Suddenly, sitting on the couch with the latest James Patterson novel seemed like a much better idea than writing. It would be entertaining and wouldn’t bruise my ego.

I was all set to park myself on the loveseat when I decided that I needed to keep on working. I reminded myself about all the writers who talk about wanting to give up, but tried once more and were able to get published. I got up (leaving my book and an inviting bowl of potato chips) and checked one more e-mail newsletter and found an anthology looking for submissions of family traditions.

Since I’m one of only two in my entire extended family who live outside of the United States, family traditions mean a lot to me. Plus, I had just finished writing my thesis and had a slew of material I hadn’t even used. I decided to send them an essay on my family’s Polish Christmas traditions.

A few days later, I got an e-mail saying they loved my work. I had almost spent the weekend reading and watching TV (not to mention a non-stop potato chip binge), but, because I gave it one more try, my work will now appear in an anthology.

Later that day, I went to the post office to pick up my mail and I had a writing newsletter and magazine in my box. It hit me that every time I get discouraged about writing I seem to get more writing periodicals in the mail. I like to think it’s a sign from the universe to keep going.

Besides, Elvis didn’t stick with drivin’ a truck and kept going and it seemed to work out pretty well for him.

Krysten Lindsay Hager, who writes everything from fiction to news to essays, has been published in New Works Review, The Academy, and the University of Michigan-Flint’s literary magazine, The Qua.

She has also been a regular contributor for a weekly newspaper in Michigan called the Grand Blanc View since 2005, and has appeared in or on Natural Awakenings, Working Writer, Absolute Write, Chronicles of Power, and Once Upon a Time.